During centerless through-feed grinding the workpiece is grinded and driven in a single pass-through between the contact surface, grinding wheel, and control wheel. The workpiece may not evade from abrasive forces, so that even parts can be grinded that have a small diameter (up to 0,1 mm) or of large length (up to 1,5 m). The grinding wheel having a ceramic or synthetic resin binding performs the chipping, whereas the smaller control disk (with rubber binder) effects the feed. The grinding wheel may have a breadth of up to 600 mm and runs at a circumferential speed of 30 m/s to 90 m/s. The control disk runs in the same direction, but has a continuously adjustable circumferential speed of 15 m/min up to 150 m/min. The workpiece rotates at almost the same speed as the circumferential speed of the control disk. Cutting depth is 0,03 mm to 0,2 mm. The centerless through-feed grinding is used for cylindrical parts without any edge, such as cylinder points. Here, the control disk is inclined by 2° to 15° towards the grinding wheel axis. At a large inclination angle the longitudinal feed speed of the workpiece can be up to 50 m/min. Centerless crosswise grinding is used for the processing of cylindrical workpieces having edges and heads, such as valve shafts, as well as for profile grinding. Here, the control disk is inclined only by 0,5°, in order to press the workpieces against a stop that serves as an ejector at the same time. Centerless grinding allows precision processing of slim, cylindrical parts with favourable chipping volume. 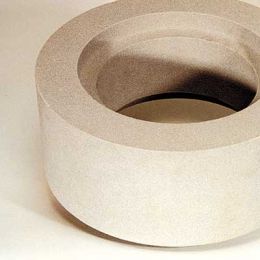